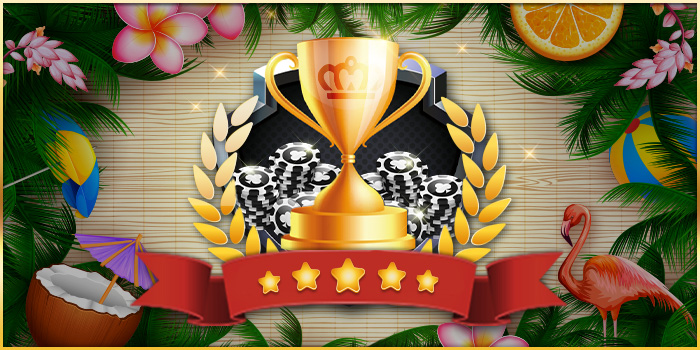 We are happy to see you are receiving the tournaments so well. With that in mind, it is finally time for another official Palace of Cards Tournament: On August 22, 2020, we will hold our Summer Tournament XXL!

The XXL tournament has especially many series for plenty of gaming fun! Seize the chance, take in the tournament atmosphere, and show everyone how far you get.

The XXL Summer Tournament will take place in the following games:

The XXL Tournament’s special feature is the high number of series. Usually, the official Palace of Cards Tournaments have three series. This time there will be five series! So, make sure to take enough time.

This time, up to 300 players can play in a group in every game. When 300 players are exceeded, the next group will open automatically. Everyone can partake for a bet of only one Chip! Of course, you will face tenacious opponents. But if you come out on top in your game, appreciation and exclusive prizes await you.

To take part in the tournament, you just need to be online in your game on August 22, 2020, shortly before 8:30 pm CET and enter the tournament.

There will be exclusive Palace of Cards certificates, numerous Premium days, and a jackpot with up to 10,000 Chips. We lovingly design the certificates exclusively for this occasion! All winners of the places one to three receive one as a PDF: 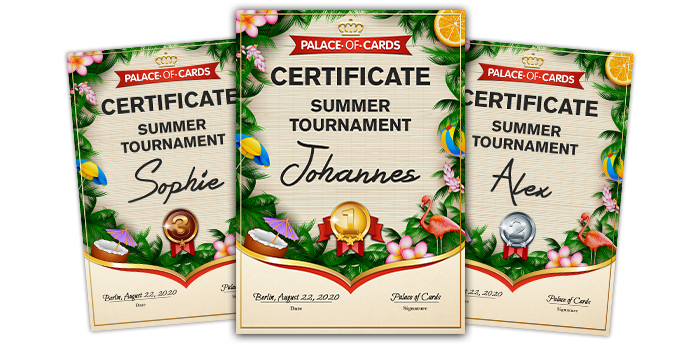 All winners means several play groups per tournament are possible: When maximum registered players are exceeded, another play group will open automatically. So, if 540 players registered for Sheepshead, the tournament would be held in two groups mith a maximum of 300 players each.

As a result, there would be two first places, two second places, and two third places. Each play group has its separate jackpot. Which play group you were successful in will be noted in your certificate.

If two players in the same playgroup win the same score, double placements can occur. In this case, the distribution of prizes changes slightly. This is always communicated clearly in our update post on the winners.

If you cannot join this time, there will be several chances to take part in an official Palace of Cards Tournament this year. We will let you know right here. Stay tuned 😉

Greetings and already wishing you a good hand,